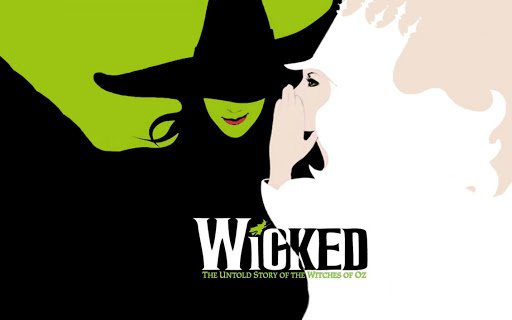 I've talked a lot about how I don't like the way most of the internet nowadays moves on a timeline, and things are only relevent for so long. I watch a lot of Booktube, which is just book-centric youtube, and it does strike me as odd how different the consumption habits of folks on there are from me. I tend to get most of my books from rag stores- I guess 'vintage' stores, you know, second-hand stores, for like a quarter or 50 cents, based on the blurb on the back. I've never really anticipated the launch of a book and then gotten momentarily obsessed with it with a bunch of other people, and then discarded it as soon as the hype died down.

I bring this up because that's how I got this copy of Wicked, and it's status as a used book is very apparent, and I actually like that. I've always liked the character of used books, and I've never been one of those people who tries to keep her books in pristine shape. But whoever had this book before me literally ripped pages out of it, and I wonder why. Specifically, they've removed two pages from the front, and two from the back. I think that they were illustrations, and I wonder if whoever had this book before me didn't rip them out to frame and hang for decoration. I'll never know, but I hope that's what happened.

I sincerely didn't know that this book was this old. The copyright date says 1995. Damn. 1995. It was a completely different world back then. This book is older than Gen Z, older than my brother. And it's age is going to factor into this review, because do you know what else that makes it older than? AO3, the place where I get most of my fanfiction.

Look, I'm not going to sit here and pretend like I think that Gregory Maguire invented the concept of fanfiction, I'm not an idiot. I know that we've been making derrivitive works for as long as we've been telling stories, I know that Romeo and Juliet is a retelling of a poem, for example. But what I will say is that I think that this book, Wicked, had a profound impact on the genre, and unless I'm dead wrong we're still seeing that impact today, almost 30 years on. It's not the first work to take a preestablished world and flesh it out or turn it on it's head, but I do think that a lot of the elements in this book became aspects of the fanfic genre as a whole, beloved aspects. Reading this book was very much like reading some of my contemporary favorites from AO3. I don't think it's fair to deny what an impact this book has had. And I got it for a quarter.

First of all, I'm kind of amazed I got through it as fast as I did, I read this in a couple of weeks, and it's 519 pages long. Jesus Christ that's long as hell for a fantasy novel. You might have noticed that I'm an amature writer myself, and I was under the impression that an agent wouldn't even look at a first time fantasy novel that was more than 100,000 words. But it's actually like 4 books in one, broken up into segments, and each of them covers different people in different time periods, so it makes it easier to get through. But I am amazed that something this long made it to print. I don't know if standards have changed since 95 or if the agent was just that impressed with it, but we know from the massive popularity that it was absolutely the right call to make.

Also, the page edges of this book are green, which I love. That right there, that small detail, is the reason I'm going to keep it instead of donating it. Even though it's missing pages. I'm not fancy, and I appreciate the work put in by the good people over at Harper publishing.

In terms of the writing itself, I found myself really getting lost in the story. A lot of this is because it was just so vastly uncomforatble. Everything about this book was just awkward and awful and really painted a picture of life that just never got to where it needed to be, not only because of the events themselves, but also because of the characters, and the way the thing was written. The rambling, stream-of-conciousness style was often just offputting, like especially how sexual it was. It very easily could have veered over into being actually sexy, but that isn't the point of the sex scenes, none of it is supposed to be erotic, and the way it's written really emphasizes how just... awkward and horrible almost every sexual action in the book is. Nobody has a good relationship. Nobody. Every sexual relationship in this book involves secrecy or cheating, and every scene is just as awkward and terrible. It makes you cringe to read.

The point of this book, at it's core, is that Elphaba never had a chance. But it covers a lot of other themes, I mean the most obvious one is the racism paralell with the sentient Animals, which is weird because I've read all 40 Oz books, and in the original source material there's literally no distinction between animals and Animals, all animals in Oz are sentient. In fact, if animals come to Oz from our world, they become sentient while in Oz. But it's incredibly obvious what Maguire was going for here, I just don't know why he made this distinction that never existed in the original source material instead of just treating all Animals as Animals. I'm not sure what we gained from that. But I do like how it adds this realistic layer to the racism where it's a spectrum, with various human groups also experiencing racism, but anti-Animal racism on the bottom of the spectrum. It's a more nuanced take that reflects reality a bit more than just having all humans unite against the Animals or whatever.

The book depends very heavily on the audience already being familiar with Oz as a concept, which with a target audience of me, at least, and I would opine Americans in general, is absolutely the way to go. I think that by not doing the worldbuilding and instead just setting it firmly in Oz so that he could add worldbuilding to the pre-established lore, he made the right choice. It would make it extremely difficult to read if you were completely unfamiliar with Oz, though. But it's such a part of the zeitgeist that I don't think that's ever going to come up.

Basically, the reason I like this book so much is because I think it did do a lot to, even if it didn't establish popular fanfiction tropes, then at least to popularize and legitimize them. I know that I write fanfiction that is more about these small character driven segments, and I'm not sure I saw that being widely used prior to this book's popularity. It's not a retelling, it exists to be read alongside the source material. And it does that job well, well enough that I apparently couldn't put it down.

I would love to watch the musical, but I'm not a wealthy traveler, so as it stands right now, I can't. I have listened to the soundtrack, and I love it as well, but you can't get the entire story just from a soundtrack. I'm really hoping we'll get a feature film or a recorded stage production, to make it more accessable so I can access it. Traveling to New York by itself is unreasonably expensive for me, and tickets to the stage show are, at the time of this writing, $192 each at the cheapest. Theater is a rich person's entertainment. I had heard they were going to make a Wicked film, but chose instead to make CATS, which did not do well, I mean, I didn't like it and it wasn't well recieved. That was a missed opportunity that I hope someone picks the ball back up on.

But the book is certainly worth the read. It isn't a feel good story, but it's a good story.